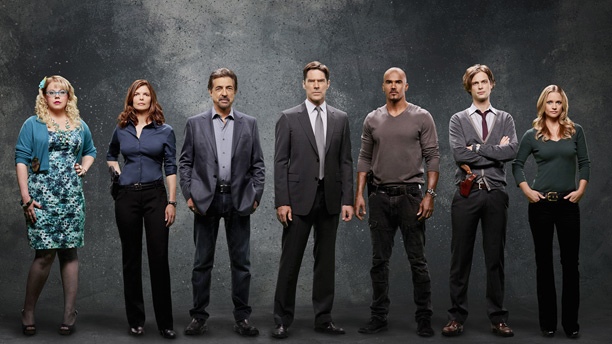 A woman is murdered by heavy rocks placed on top of her until the killer smashes her head with the final stone. The BAU investigates and finds the murders are related to the Salem witch trials.

While bringing in supplies for her Day of the Dead party, Garcia tries to scare Reid by having him check out a jar of eyeballs in her refrigerator and making it seem like blood is dripping from her eyes. Reid is unfazed. Garcia, disappointed, says, “You didn’t even flinch.”

Reid tells Garcia everyone has a scary side, she just has to unleash it. Garcia asks to see Reid’s scary side. He warns once you see it, you can’t unsee it. Then he lets loose his version of Dirty Harry’s “Do you feel lucky, punk?” It’s not scary but if you love Reid and Garcia, as I do, this scene is a must see.

The unsub seems to be a creepy looking dude who can’t take no for an answer from blondes. He stalks a woman with her daughter at a library, who is told by the librarian that she can’t check out a book because it’s a reference book. The creepy guy confronts the librarian, who still says no. Creepy guy doesn’t understand why the woman won’t give him her phone number or let him apologize afterward.

Soon after, we find out the librarian is actually the one with the murdering problem as he hangs the creepy dude and “sends his soul back to hell.” Garcia’s research shows the creepy guy was, in fact, a creepy guy with a long rap sheet of voyeurism and other gross, invasion of privacy crimes.

The team finds the unsub is branding his victims. Since he’s escalating to more public murder locations, they also believe he’s operating under the delusion he’s in another time and is invulnerable.

Reid discovers the brand on the victims dates back to the Salem witch trials and that the unsub may believe he’s hunting witches. The librarian goes unhinged when his supervisor tells him she checked the book, which wasn’t reference, out to the woman from the day before. We see his perception of other people is very distorted.

The woman and her daughter wake up in a house made out of stone, where the librarian accuses them of engaging in wifchcraft. He shows evidence of self-flagellation, which is never good in these situations. The librarian tries to get a confession out of the woman, who refuses, as she’s done nothing wrong.

Garcia finds out the unsub librarian’s name is Leland Duncan and the team splits, heading to the library and also to where he lives. Morgan goes in all guns blazing, in a short sleeved shirt. Thumbs up.

The woman, Yvonne Carpenter, confesses to Leland that she’s a witch. Yvonne plays along, asking if her daughter betrayed her, insisting the daughter is a witch hunter. She tells Leland her daughter has the mark of the angel and he looks behind her ear, finding a birthmark. He believes Yvonne and takes her daughter away to be released.

Despite her confession and the promise of leniency, Leland informs Yvonne she will be executed. He leads her outside and imagines screaming villagers. Yvonne discovers he didn’t release her daughter and that mercy is in the form of Yvonne being burned at the stake first so she doesn’t have to see her daughter die.

The team finds Yvonne and her daughter, Kylie, in time. Leland is shot by Blake.

At Garcia’s Day of the Dead party, the team puts photos of their deceased loved ones on the altar and share stories. It’s a very nice, very sweet moment for the team.

On a scale of 1 (not creepy or disturbing at all) to 5 (that episode with the human marionettes), I’d rank this episode a 2. Next week’s episode looks like a straight up 5.

There’s a neat effect when Reid puts together the lineage from the witch trials. It’s like a glowing gold effect as certain names pop out to him.

Blake’s mom is who got her interested in crossword puzzles.

Reid puts up two photos: one of Maeve and one of Nicola Tesla.

So, what did you think of this episode? Did you like the scene in the beginning with Garcia and Reid?