Justified is back! Season 5 premieres tonight on FX at 10pm EST. Tonight, Raylan deals with a bunch of Crowes that arrive in town. Michael Rapaport (He’s been in everything. You know him.) plays the formidable head of the Crowe family. Meanwhile, Boyd struggles with Ava being locked away and the episode ends on a scene Walton Goggins told EW “forever change[d] the way that I view Boyd Crowder.” I’m dying to find out what that scene is all about.

Agents of Shield is also back and all new on ABC at 8pm. Tonight promises to deliver information on what happened to Coulson after Avengers. It doesn’t look like Tahiti was as magical of a place as we’ve been led to believe. 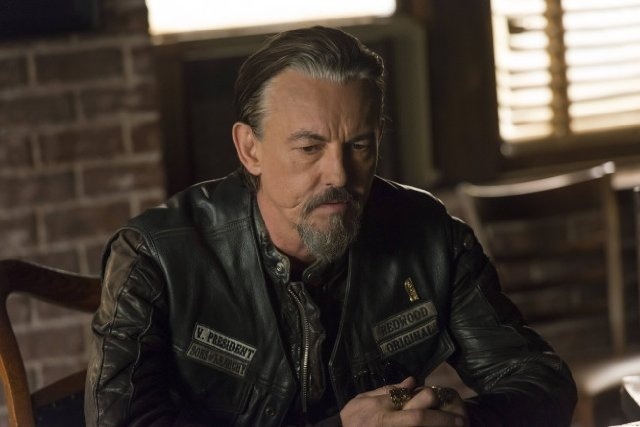 Tonight’s the night. Are you ready for the Sons of Anarchy season finale? Yeah, me neither. Here’s what I’m watching tonight.

Sons of Anarchy (FX, 10pm EST) – Hold onto your hat, everyone. It’s the two hour season finale. Who will be left alive by midnight? It’s not looking good for several characters. Anarchy Afterword, with Kurt Sutter, Katey Sagal and Maggie Siff, is part of the finale so the actual episode will be 110 minutes.

Tuesday usually brings the drama and you can certainly count on it tonight. Here’s what I’m watching.

Agents of SHIELD (ABC, 8pm EST) – It’s a repeat tonight of Girl in the Flower Dress, the episode that introduced Raina. If you missed this one, definitely watch it tonight as Raina comes back in an all new episode next week.

Supernatural (CW, 9pm EST) – Tonight’s the mid-season finale and a lot will be going down. There’s a huge angel crisis that reunites Cas with Sam and Dean. Also, will Dean tell Sam about Zeke? Watch and find out. PS – Please don’t, Dean.

Sons of Anarchy (FX, 10pm EST) – This is the last episode before the big finale. Kurt Sutter has kept awfully quiet on the subject, except for promising naked Juice in this one. Knowing Sutter and Sons of Anarchy though, good things come with a price. I’m still expecting it to be organic orange juice. Like most of the other episodes this season, it’s extended and clocks in at 93 minutes.

What’s on your TV schedule for tonight?

Everyone’s in trouble. Must be Tuesday. Here are my recommendations for TV tonight.

Agents of SHIELD (ABC, 8pm EST) – The team investigates a woman whose powers are out of control. Bonus, we get to find out more about May and her Calvary nickname. I’m sure she won’t have a good time revealing that information but I can’t wait.

Supernatural (CW, 9pm) – Sam and Dean go undercover as born again virgins when four members of a chastity group die. Will it be dumb? Will it be awesome? There’s one way to find out but I can tell you the stills of Dean in this episode are adorable.

Also, Sons of Anarchy is not on tonight. Never fear, SoA-ers. It’ll be back all new next Tuesday at 10.

There’s plenty to choose from on TV tonight. If you’re looking for intense drama, witches or a Game of Thrones parody, I recommend setting your DVR for these shows.

Law and Order: SVU (NBC, 9pm EST) – It gets personal for Rollins when her friend is part of a rape investigation, pitting her against Benson and Amaro.

American Horror Story: Coven (FX, 10pm EST) – The Axeman is here, Kyle is in the greenhouse, Cordelia’s on an endless and unwilling vision quest and of course, someone is back from the dead. I wouldn’t miss this one.

South Park (Comedy Central, 10pm EST) – Tonight’s episode picks up where last week’s Game of Thrones episode left off. If you missed it, don’t worry. Comedy Central is reairing it at 9:30. Will the dragons finally show up? Will Randy survive Black Friday? There’s only one way to find out. Or, you could come back here tomorrow and I’ll tell you all about it.

What will you be watching tonight?

Don’t know what to check out tonight? Here are my recommendations.

Supernatural (CW, 9pm EST) – Drama? Oh yes. Dean helps an old friend hunt a ghost and information about Dean shocks Sam. What is it? Better tune in to find out.

Sons of Anarchy (FX, 10pm EST) – The mess with Gaalan and the IRA finally comes to a head with the big transport job. Will it all go according to plan? Of course not. It’s Sons of Anarchy. There are only three episodes left this season and Kurt Sutter says not to miss this one.

Tonight’s the big night if you’re into arguing women and zombies. Here’s what I recommend checking out.

Real Housewives of Atlanta (Bravo, 8pm EST) – The drama continues as Kandi’s fiancé, Todd, continues to be scrutinized by virtually everyone Kandi knows. Also, Cynthia worries about her surgery and Kenya decides to move. PS – Phaedra’s on Watch What Happens Live at 11 tonight.

The Walking Dead (AMC, 9pm EST) – Hold on to your hats, everyone. Especially you, Carl. The Governor is back. Odds are he hasn’t worked out his severe mental issues since he’s been gone so this episode is not one to miss. The episode is also called Live Bait so something tells me it’s not going to be all sunshine and farming at the prison tonight.

Talking Dead (AMC, 10:01pm EST) – Tonight’s guests are the Governor himself, David Morrissey, and Ike Barinholtz from the old MadTV and Hulu’s awesome animated series, The Awesomes. If you have to crash early, be sure to set your DVR for this one.

Criminal Minds (CBS, 9pm EST) – Tonight, the BAU investigates the disappearance of teenagers who are also suspected of perpetrating several mass murders. This should be an interesting one.

American Horror Story: Coven (FX, 10pm EST) – There’s a dark entity stuck inside the school and the girls set about making contact with it. Given all they’ve been through so far, it’s pretty inadvisable but should make for a great episode.

South Park (Comedy Central, 10pm EST) – Okay, are you sitting down? Randy gets a job as a mall cop on Black Friday. Also, the boys are dressed up like their questing characters in the upcoming South Park video game, The Stick of Truth, and the classic episode, The Return of The Fellowship of the Ring to the Two Towers. Cartman. Wizard hat. Don’t miss it.

Unsure of what to watch tonight? Here are my Monday recommendations.

How I Met Your Mother (CBS, 8pm EST) – In tonight’s episode, Robin and Lily give challenges to Barney, which he — wait for it — accepts. Also, it’s the return of Bryan Cranston!

2 Broke Girls (CBS, 8:30pm EST) – Max and Caroline go to a hot restaurant that’s almost impossible to get into. Will shenanigans ensue? Most definitely.

Over on TBS, there’s a Big Bang Theory marathon from 9pm to 11pm.

South Park‘s Coon and Friends trilogy is on Comedy Central starting at 9:30pm. If you’ve been missing Mysterion as much as I have or have a fondness for Cartman and Cthulhu, this is the trilogy to watch.

Need your fix of drama before you head back to work tomorrow? Here are my recommendations for what to watch tonight.

Real Housewives of Atlanta (Bravo, 8pm EST) – The drama continues as NeNe texts Apollo, Porsha moves in with her mom and Kenya tries to fight being evicted.

The Walking Dead (AMC, 9pm EST) – Let’s face it. It’s not looking good for most of the people at the prison. If you want to find out who survives this week, you’d better watch it tonight before you hear about it on Facebook.

Talking Dead (AMC, 10pm EST) – AMC says the guests tonight are Adam Savage and Breckin Meyer but if you watched Talking Dead last week, you know Chris Hardwick said there will be a surprise guest. Usually, a surprise guest means someone didn’t make it through Walking Dead this week. Just saying. Set your DVRs.

Watch What Happens Live (Bravo, 11pm EST) – If you want the inside scoop about what goes down on tonight’s RHOA, there’s no better source than Andy Cohen. Tonight’s guests are Porsha and Nelly.

Comic Book Men (AMC, 12am EST) – Need to decompress after Walking Dead? Check out this show. It’s funny, nerdy and often has famous guests pop by the shop. This week, a Mr. T water game comes into the shop. It’s okay to admit you’re a little curious.