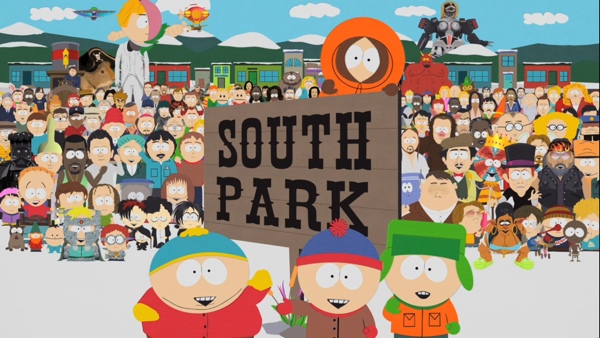 Mr. Mackey has the Intellilink system installed in the entire school. In order to do anything, students and staff have to go through the system. Instead of working, it plays different music throughout the entire school like Lionel Richie’s “All Night Long.”

Kyle goes to Mr. Mackey for advice about Ike, who is talking in a deep voice, which is Matt Stone sounding like a teenage, rebelling Matt Stone. This voice is awesome. Mr. Mackey, counseling Kyle while on the toilet, suggests Kyle research Canadian puberty, as it might be different.

When Kyle confronts Ike at home, Ike rips off his shirt and yells, “Come on, bro! Kick the fucking baby. Let’s see you try.”

Kyle takes Ike to see Yo Gabba Gabba live, where Ike takes the stage and tries to have sex with Foofa, the pink one. Backstage, everyone tries to tell Ike how wrong this is. However, Foofa has an epiphany that maybe it’s time for her to stop doing kid shows.

Foofa takes the Miley Cyrus route to burning her kid friendly past. The rest of Yo Gabba Gabba and Sinead O’Connor show up at Kyle’s house to convince Foofa not to show her strange at the VMAs. There’s a song. It’s pretty awesome.

The Intellilink technician tells Mr. Mackey the only way to fix it is to rip it all out and burn it. He gives the tech the go ahead. After, he hands Mr. Mackey a clipboard and shoots himself.

With his new medication, Ike sounds like his normal self but talks about Dora’s strange.

Bill Hader voices one of the Yo Gabba Gabba dudes. I don’t know their names. I had to look up the correct spelling of Foofa.

I love this line: “You are watching E! Entertainment News. God knows why.”

I thought this episode was pretty great with the Yo Gabba Gabba mess. It seems like either Matt, Trey or maybe even Bill Hader has been forced to watch a lot of that lately. I also loved Ike’s Canadian puberty voice and the songs that played when Intellink messed up.

What did you think? Did it live up to your expectations for Ike’s return?