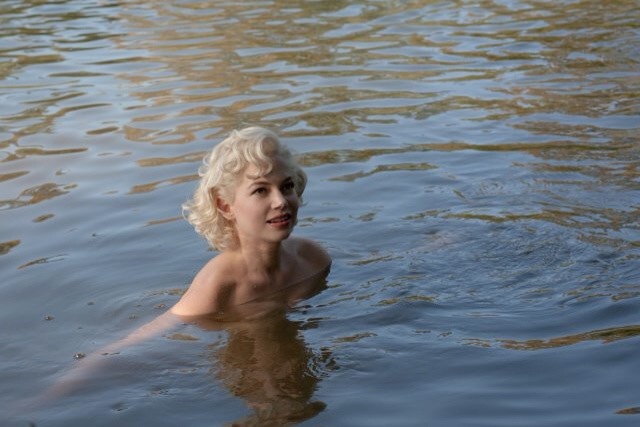 My Week With Marilyn (2011) is based off of Colin Clark’s memoir, which details his time as third assistant director on The Prince and The Showgirl, starring Sir Laurence Olivier and Marilyn Monroe.

From the time she gets off the plane, Marilyn (Michelle Williams) is a nervous wreck, with zero confidence in her acting ability and a swarm of people surrounding her, telling her she’s great. She’s hours late to set, forgets her lines and runs away when it all gets to be too much. All of this drives Olivier (Kenneth Branagh) to madness, as he is both starring in and directing the film.

Marilyn has a new husband, writer Arthur Miller (Dougray Scott), who leaves a notebook full of criticisms about her where Marilyn can and does find it. This sends Miller away and Marilyn into a spiral, insisting the only hand she’ll take to steady her be that of twenty-three year old Colin (Eddie Redmayne). Nearly twenty-four, he insists. Marilyn is thirty and already married three times. Her handler (Dominic Cooper) warns Colin she’ll make him feel like he’s the only one and then leave him behind but Colin refuses to listen.

If I wasn’t already convinced Michelle Williams can do anything, this would have cemented it. I had the great fortune of seeing her in Cabaret this year and much like her Sally, her Marilyn lives in those quiet moments, where the smallest change in voice or expression shows all the cracks, insecurities and old wounds in the character.

Let’s talk about Eddie Redmayne for a minute. You probably know him from Les Mis and I previously talked about him in my review of Hick. He’s the perfect match for Williams as he can play lovestruck and devastated in a way that’s both visually subtle and emotionally explosive. If he doesn’t have big things in the works for his career, he should.

Despite knowing better, I rooted for Marilyn and Colin. They worked in the moment, as most things that burn bright and burn fast do. There is such a level of innocence with the two: Marilyn looking for an ally that doesn’t treat her like a child and can see the true her and Colin stepping up as a man for the first time in his life. He protects her but doesn’t try to control her like everyone else does.

My Week With Marilyn is well written, acted and directed. It is an absolute pleasure to watch. Out of Loved It, Liked It, Didn’t Like It or Hated It Like Poison, I give it a strong Loved It.